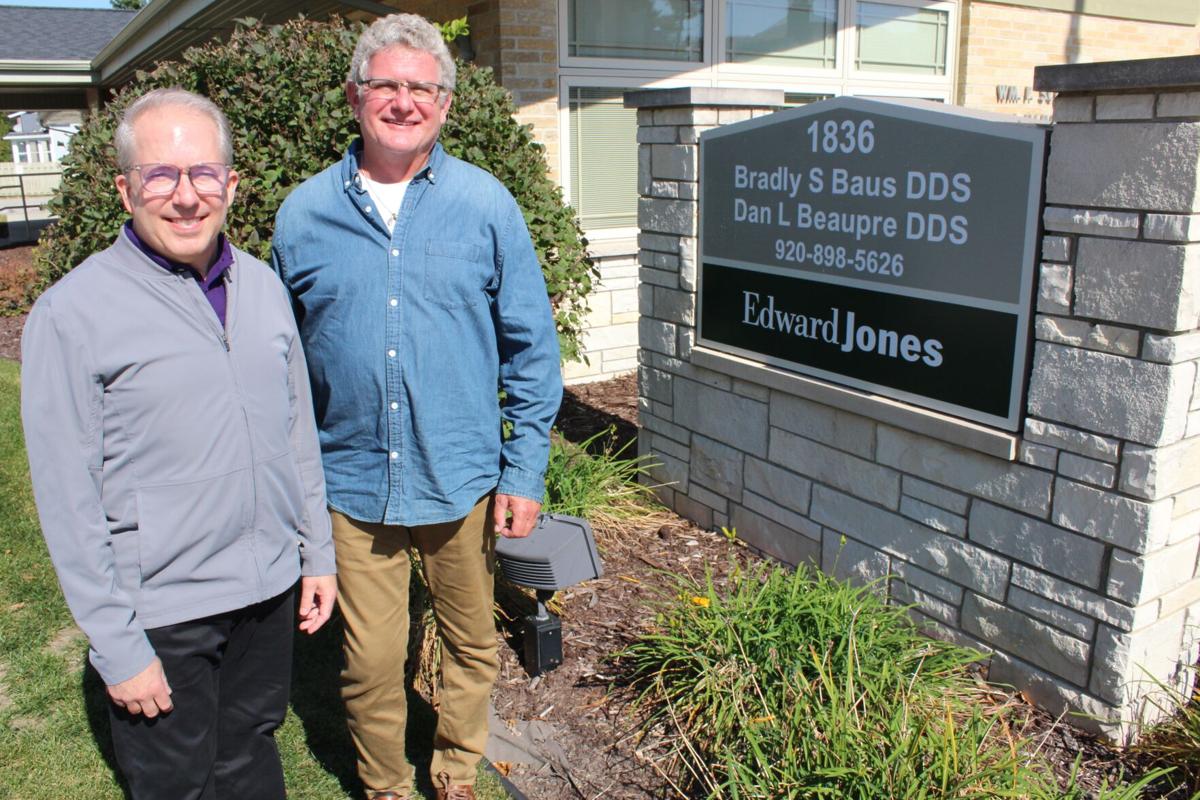 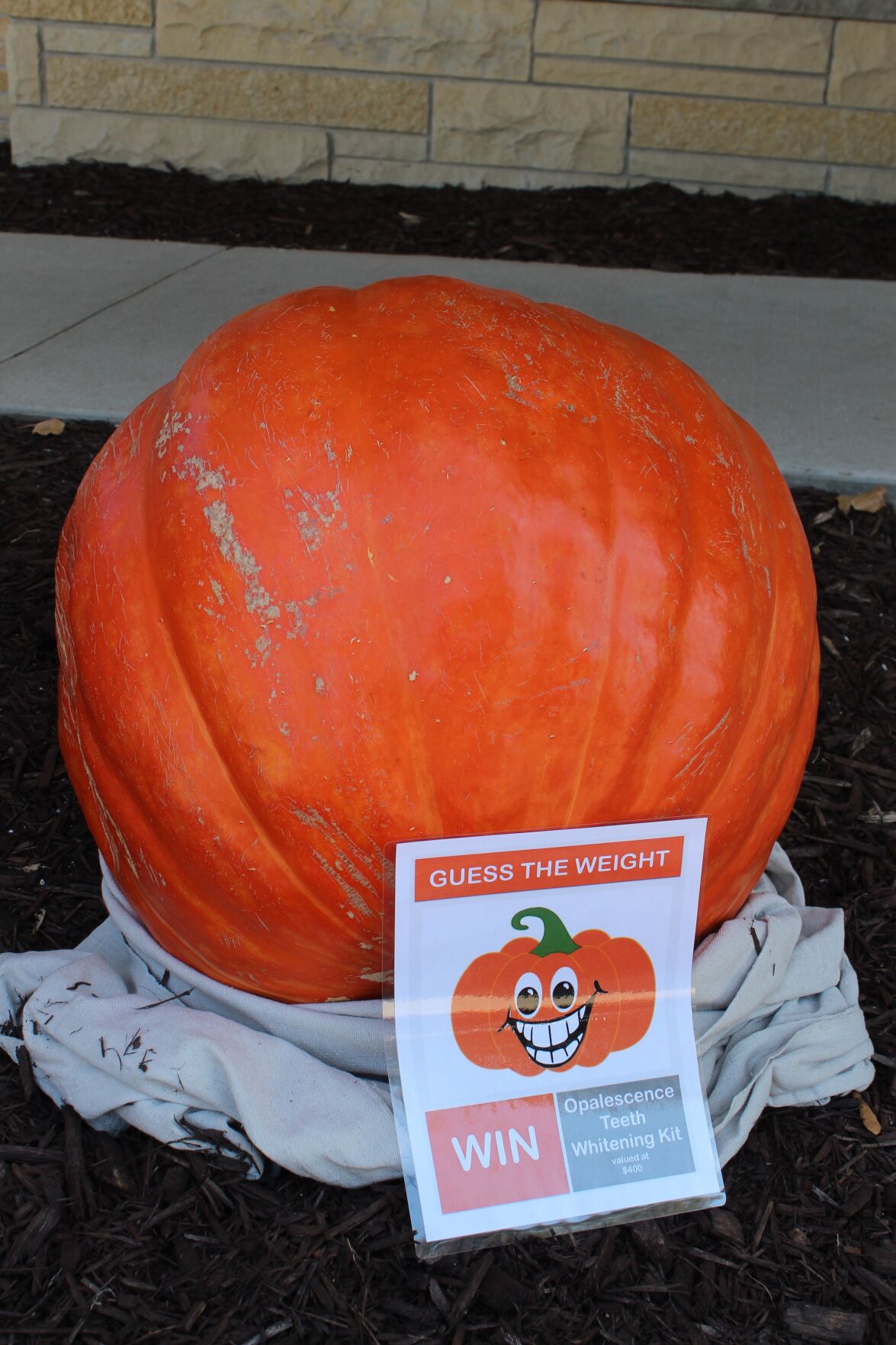 Bradly Baus Dentistry in New Holstein is sponsoring a contest to guess the weight of the pumpkin sitting outside its office at the corner of Wisconsin Avenue and Van Buren Street. People can come in to enter during business hours prior to Friday, Oct. 29 for a chance to win a teeth whitening kit valued at $400.

Bradly Baus Dentistry in New Holstein is sponsoring a contest to guess the weight of the pumpkin sitting outside its office at the corner of Wisconsin Avenue and Van Buren Street. People can come in to enter during business hours prior to Friday, Oct. 29 for a chance to win a teeth whitening kit valued at $400.

New Holstein dentist Dr. Bradly Baus said he thought for a number of years about the possibility of adding another dentist to his practice located in the professional building at the corner of Wisconsin Avenue and Van Buren Street.

“I never really took the time to pursue it,” Baus said as he was busy taking care of patients of all ages at his modern dental clinic.

But some time was found to look into expanding the practice, and now Dr. Bradly Baus Dentistry has not one but two additional dentists practicing there along with a number of other new staff members.

Dr. Dan Beaupre is the most notable addition, having sold his Manitowoc practice of 33 years and bringing his skills and many of his longtime patients to New Holstein with him.

“I enjoy doing this stuff,” Dr. Beaupre said. “I enjoy doing dentistry and I’m still really good at it,” pointing out that he is confident in his ability to help his patients. He said he can do all types of dental procedures but specializes in crown, bridge and cosmetic work.

Dr. Beaupre is working between two and three days per week as he transitions toward retirement—if the many patients who have followed him from Manitowoc will ever let him do so. “These patients are not just patients, they’re friends,” he said.

The Manitowoc native attended the University of Wisconsin-Oshkosh and graduated from Marquette University’s Dental School in 1988. A resident of Reedsville, he started his work in New Holstein in July.

Dr. Beaupre described Dr. Bradly Baus Dentistry as one of the most technologically advanced practices he has seen. “The equipment that he has is top-notch,” he said. “I value working on his patients, too. The patients have been really receptive.”

Dr. Beaupre is married. Their child Cooper passed away about 10 years ago. They have two hunting dogs. He said he enjoys fishing and scuba diving, something he has done since the late 1970s. “It’s a great sport,” he said. “I’m in a different world when I’m diving.”

In addition to Dr. Beaupre, Dr. Rebecca Stevens is currently seeing patients at Dr. Bradly Baus Dentistry as well. She is expecting her first child in December and is unsure of her plans after that. The Marquette graduate and California transplant resides in the town of Erin in Washington County. She has been focusing on seeing children since starting at Dr. Bradly Baus Dentistry in July.

Dr. Baus said they have had ample space in their office for the additional dentists and could remodel some overflow space if needed.

In addition to the dentists, Dr. Baus’s wife Lori—a registered nurse—increased her hours with the practice starting in May. Dr. Beaupre’s wife Sara works with him as a hygienist, something she has done for about 25 years.

Student Josie Decker is working at the practice while studying to be a dental assistant. Mary Ditter has been added to help at the front desk, while Audrey Bratz brings 15 years of ex-perience as a chairside assistant to the practice.

The added staff has allowed Dr. Bradly Baus Dentistry to expand its hours to Mondays through Fridays from 8 a.m. to 5 p.m. with dentist coverage during those hours.

Dr. Baus also has undergone some additional training from the American Academy of Facial Esthetics to do Botox therapy (for relief of migraines) as well as dermal fillers. He also has received additional training into oral appliances for people who clench or grind their teeth while sleeping.

“The technology is continuing to advance,” Dr. Baus said, pointing out that today’s dental patients are getting more familiar and comfortable with digital tools which assist with procedures including 3D imaging, implants and clear alignment therapies.