You are the owner of this article.
Edit Article Add New Article
Home
News
Sports
Editorial
Multimedia
Obituaries
Classifieds
Calendar
Contact Us
e-Edition
Share This
1 of 2 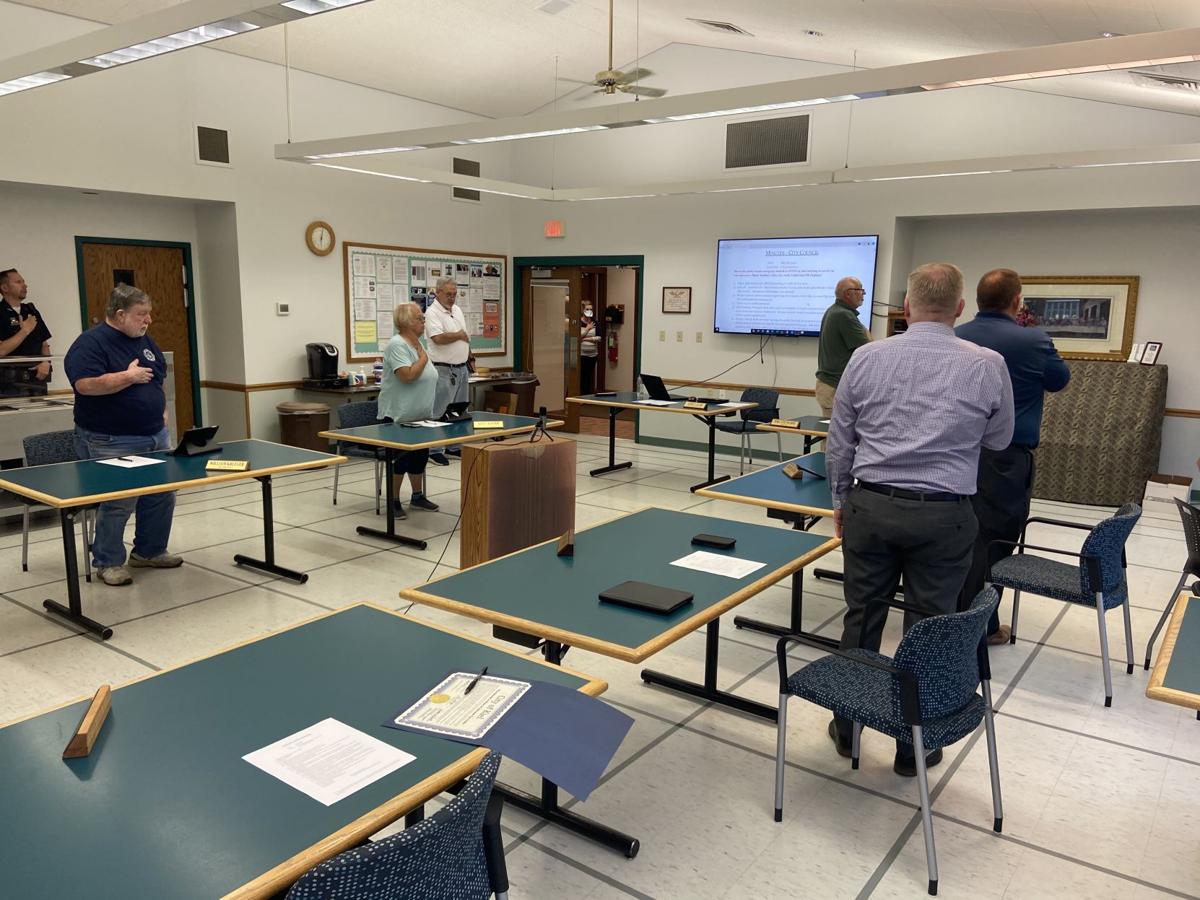 Kiel's City Council met Tuesday, June 9 in person for the first time since March, due to pandemic precautions. They met in a socially distancing fashion in the upper level of the Kiel Community Center. 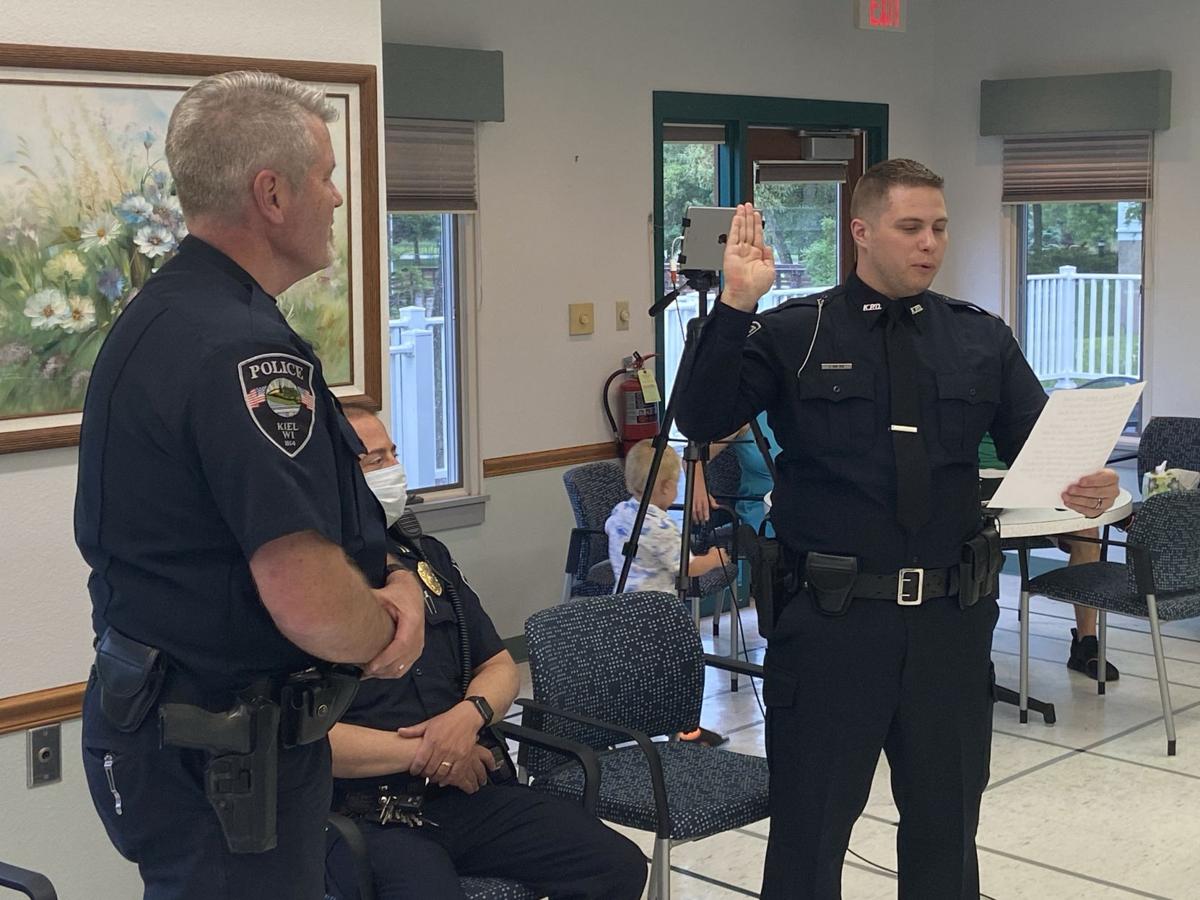 Kiel's City Council met Tuesday, June 9 in person for the first time since March, due to pandemic precautions. They met in a socially distancing fashion in the upper level of the Kiel Community Center.

For the first time since COVID-19 sheltering restrictions went into place in March, the Kiel City Council held a “live” regular meeting at the Kiel Community Center June 9.

After a series of teleconference meetings, the Council was able to conduct its business live and in person in the upper level of the community center, which still provided options for safe distancing.

The in-person meeting allowed for the official swearing in of Kiel Police Officer Joseph Van Oss, who returned to the KPD in late February after serving the past two and a half years with the Calumet County Sheriff’s Department.

Van Oss served as a part-time officer with the Kiel Police Department prior to that service.

Kiel Police Chief Dave Funkhouser welcomed Van Oss. “We are excited to have Joseph back with our department, and we appreciate the opportunity to take the time to honor this special moment in an officer’s career, even though we had to wait a few months.”

Funkhouser said that the hiring of Van Oss was made possible by a recent adoption of a lateral move compensation policy by the Kiel Council.

The event will be officially hosted by the Kiel Lions Club from 8 a.m. to 8 p.m. and include a bike run to raise funds for veterans. Along with a Class B beer license, the Council granted approval for closure of the Fourth Street between Fremont Street and Indian Hill for the event.

Ordinance 582 was passed by the City Council to give the city options for working with special events - gatherings of people number 200 or more.

Kiel City Administrator Jamie Aulik said the ordinance will help the city in its ability to coordinate city services for such events.

Aulik said the application process would enable the city to route information properly to all department heads affected so they can have knowledge of the event and share input on their concerns.

Ordinance 583 was passed changing the annual time line for sidewalk repairs and replacement. Under the new system, the city will complete annual sidewalk inspections by June 1, then notify property owners of needed repairs before July 1. Property owners will have until December 1 to let the city know of their intentions to do the work themselves or have the city’s contractor perform the repairs.

Due to the pandemic, anyone who receive a letter to do repairs from last year will have a one year extension of the deadline for repairs.

Ordinance 584 received Council approval, with the intention of causing building permits to expire after a period of one year. Expired permits can be renewed during a subsequent six month period for an additional charge amounting to half the original permit fee.

Ordinance 585, defining potential conflicts of interest, was passed on a 4-2 vote.

The new ordinance states that an elected Kiel city official can not simultaneously hold office and be an employee of the city.

Exemptions were noted for volunteer firefighters, EMS practitioners and other categories outlined in state statute.

Generally, it was thought that the statute does not apply to volunteers, only those who are directly in the city’s employ.

In other business, the Council gave its approval to the annual Wastewater Treatment Plant Compliance Maintenance Report. Kiel received a B in the categories of loading and biosolids management, with a grade of A in all other categories.

Be the first to know!