Most of the Lisowe family was pictured during a reunion in 2007. 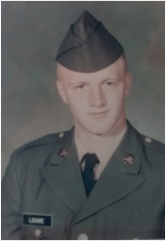 The oldest son of Ambrose and Lorna Lisowe, Jim, was drafted into the Army in 1961 and drove truck on convoys in Thailand and Cambodia for five months before assigned to drive the colonel’s jeep. 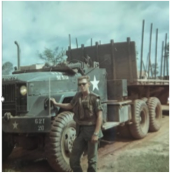 Ambrose Lisowe’s brother-in-law David Heller was drafted into the Army in 1966 and served in Vietnam as a truck driver. 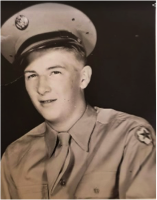 Ambrose Lisowe Sr. after being drafted into the Army in 1946.

Most of the Lisowe family was pictured during a reunion in 2007.

The oldest son of Ambrose and Lorna Lisowe, Jim, was drafted into the Army in 1961 and drove truck on convoys in Thailand and Cambodia for five months before assigned to drive the colonel’s jeep.

Ambrose Lisowe’s brother-in-law David Heller was drafted into the Army in 1966 and served in Vietnam as a truck driver.

Ambrose Lisowe Sr. after being drafted into the Army in 1946.

Ambrose Lisowe Sr. was born in Brothertown on April 26, 1926, the oldest child of Irene and Leo Lisowe.

He grew up during the Great Depression, helping his family on their farm. Ambrose had three brothers—Claude, Martin and Marvin—and one sister, Mary. When he got to school age, he walked the 1-1/2 miles (both ways) to school in Jericho. Occasionally if they were in town, or the weather was too cold, his dad or a neighbor would give him a ride home. After graduating eighth grade, he went back to helping his family on their farm.

Ambrose was drafted into the U.S. Army on Jan. 4, 1946. His parents—fearful of losing their oldest son—decided to have another child so they would not have time to think about his death if he did not come home. Mary was born while her 20-year-old brother was serving in the Army. Ambrose went to basic training at Camp Crowder in Minnesota. After basic training, he served as a hospital orderly at Oliver General Hospital in Augusta, Georgia. He was discharged on May 6, 1947.

In 1951, Ambrose’s brother Martin was drafted in the Army and served as a cook in Korea until being discharged in April 1953.

Besides his brother, Ambrose had four brothers-in-law who served in the military:

David Heller was drafted into the Army in ‘66 serving in Vietnam as a truck driver until being discharged as an E5 specialist in 1968.

Wilbert Stecker was drafted into the Navy, serving from 1945 to 1946 in maintenance as a fireman second class. He was stationed in the port of Oregon.

Herman Stecker enlisted and served in the Navy in 1952 serving on the USS Gilmore.

Allen Stache was drafted into the Navy from 1952 to 1955, serving as fireman I on the USS Marion County.

Ambrose met his future wife while driving his best friend Pat Amel and his date Lorna Stecker home from a dance. After Pat fell asleep in the back seat, Ambrose talked to the pretty redhead as he drove her home to Hilbert, asking her out on a date, and the rest was history. They dated a few years and were married on Feb. 8, 1950 in Potter. Ambrose and Lorna have 10 children—Jim, Don, Jerry, Karen, Rosemary, Chuck, twins Mariann and Marilyn, Ambrose Jr. and Joe. In the early 1960s, Ambrose saw a farm he really liked and told himself that one day he was going to buy that farm. In 1965 he and Lorna bought the 200-acre Paul Langenfeld farm, one of the bigger farms of that time.

In 1971, Ambrose and Lorna’s oldest son, Jim, was drafted in the Army, driving truck on convoys in Thailand and Cambodia for five months before assigned to drive the colonel’s jeep. He was discharged in April 1972 as an E4 sargent.

Ambrose and Lorna’s daughter Karen married Duane “Jack” Heller who was drafted into the Army in 1969, serving as a mortar combat sargant. He was discharged in July 1971 as an E5 sargent.

As their family grew to include spouses and grandchildren, Ambrose and Lorna bought neighboring farms and all three generations could be found working on the farm. In 1979 Ambrose and Lorna consolidated the farms by forming A&L Lisowe and Sons, Incorporated. By this time they did custom work for area farmers, besides their own field and farm work. Ambrose has always loved farming. As a true farmer, it’s still his favorite subject to talk about. While Ambrose managed the operation of the farm, Lorna handled all the bookwork, often working late into the evenings, accounting for every penny.

Ambrose has three grandchildren who enlisted in the service.

His grandson, Allen Lisowe (Jerry) enlisted in the Army from 1992 to 1995 and was discharged as an E4 specialist, serving as a cook in South Carolina.

His granddaughter Jenny Warner enlisted in the Air Force in 1993 because her grandpa and dad, Jim, served and she wanted to travel. Her proudest moment was being awarded “Outstanding Airman of the Year” from the general of the base. She was stationed in Hawaii next to Pearl Harbor, where she met her husband Tim, who worked on the flight line unloading cargo from C130s. Between the two of them, they have had tours of duty in Australia, Japan and Korea. Tim, who enlisted in 1992, was discharged as an E4 in 1997, while Jenny was discharged as an E4 in ’98.

In 1999 Ambrose and Lorna moved off the family farm to a small ranch-style home. At the time, Ambrose was still very active in farming, spending most of his days at the farm, mostly driving tractor. As the book work became more complicated, much of it was turned over to an accountant, with Lorna still doing payroll.

Ambrose lost his pretty redhead 10 years ago on July 4, 2011. He has been blessed with great health, as this past spring, at the age of 95, he was still able to help out his sons by raking hay using the first tractor he bought more than 70 years ago.

Ambrose Lisowe is an American farmer through and through. To this day, he continues to go along to the cattle market on Tuesdays where everyone still knows his name.