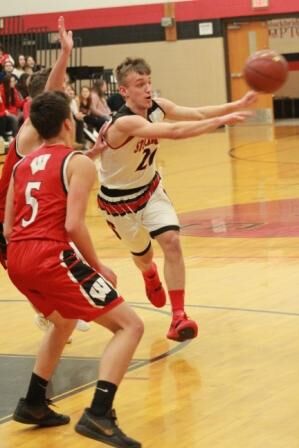 The Indians’ Sawyer Levknecht dishes the basketball off as Stockbridge held off Wausaukee last Friday night. 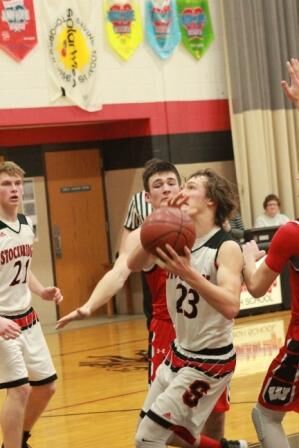 Noah Herman of Stockbridge slices through the Wausaukee defense to the basket in the Indians’ 55-53 victory.

The Indians’ Sawyer Levknecht dishes the basketball off as Stockbridge held off Wausaukee last Friday night.

Noah Herman of Stockbridge slices through the Wausaukee defense to the basket in the Indians’ 55-53 victory.

It was an uphill battle, but Stockbridge boys basketball snapped a three-game losing streak as they rallied to beat Wausaukee, 55-53, at Stockbridge High School Friday.

Down 30-22 at halftime, the Indians took their first lead on a Joey Schneider bucket with 11:22 left in the game. That made it 36-35 Stockbridge.

The lead would change hands five more times before Jake Willett's hoop with 1:50 remaining made it 50-48. Free throws by Noah Herman and Will Langteau down the stretch secured the victory as Wausaukee scored with four seconds left, but were unable to get another possession.

The visiting Rangers forced the Indians into a handful of turnovers in the first half.

"Their pressure really bothered us at the start, but we adjusted," said Stockbridge coach Dale Forstner.

"This wasn't the prettiest of wins, but we did what we had to."

In the junior varsity game, it was all Indians as they blew out to a 38-10 halftime lead in routing Wausaukee 73-25. Zach Daun had outscored the Rangers by himself pouring in 31 points. Levi Piper did the same adding 26.

Last week Tuesday, Stockbridge held an eight-point lead, 27-19, at Gresham, but could not hang on and dropped a 60-53 decision.

"We just let this one slip out of our hands," adds Forstner.

In a recent JV tilt, Zach Daun had a game-high 23 points as Stockbridge steamrolled Wolf River Lutheran of Shawano.

In another recent varsity contest, a powerful Burlington Catholic Central team scored a 70-59 win in Stockbridge despite 17 points from Herman, 16 points and ten rebounds from Schneider and 12 points from Willett. SHS was just 4-16 from three-point land.

After nearly not even having a season due to low numbers, the Stockbridge girls basketball team has stormed out of the gates to the tune of a 5-0 start.

Last week in Shawano, Maddie LeGault led four Stockbridge players in double figure scoring as she poured in 23 points in a 70-33 win at Wolf River Lutheran. Rhonda Cole added 17 while Breanna Ecker and Grace Vande Hey had ten each.

Saturday in Madison, the Indians pulled away for a 54-44 win over Abundant Life Christian. Cole had 15 points, LeGault added 13 and Kali Schmunck 12. SHS led 27-23 at halftime. Earlier this month, Stockbridge scored wins over Fond du Lac Christian and Washington Island.