You have permission to edit this article.
Edit
Home
News
Sports
Editorial
Multimedia
Obituaries
Classifieds
Calendar
Contact Us
e-Edition
Share This
1 of 3 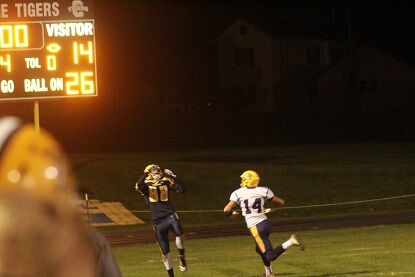 With no time showing on the clock, Chilton's Ryan Broeckel picks off this desperation pass by Denmark to secure an 18-14 Tiger win in a WIAA Level 1 Division 4 playoff game at Morrissey Field 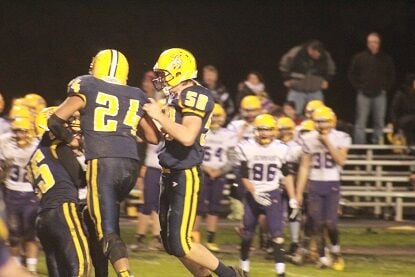 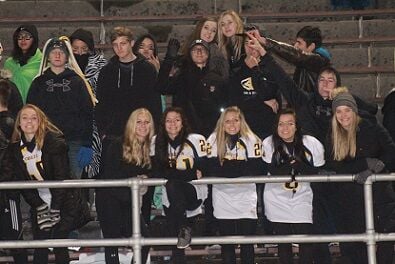 The Chilton student section celebrates the first playoff win since 2006

With no time showing on the clock, Chilton's Ryan Broeckel picks off this desperation pass by Denmark to secure an 18-14 Tiger win in a WIAA Level 1 Division 4 playoff game at Morrissey Field

The Chilton student section celebrates the first playoff win since 2006

Ryan Broeckel intercepted a Jack Satori pass in the end zone on the final play of the game to preserve an 18-14 Chilton victory over Denmark in a WIAA Level 1 Division 4 playoff game before a vocal crowd Friday night at Morrissey Field.

Denmark had forced a Chilton punt and started its final drive at their own 31 yard line with 48 seconds left and no time outs remaining.

On the second play of that drive, Satori hit Kenneth Satori for a 42 yard completion to the Tiger 26.

Following two straight incompletions and with just two seconds left, Jack Satori's pass to the end zone was picked off by Broeckel.

A Jake Criter to Kaiden Mikalowsky pass late in the first quarter gave Chilton a 6-0 lead, but the Vikings scored their first TD in the final minute of the second quarter to take a 7-6 halftime lead.

Markus Suttner scored from a yard out with 7:14 left in the third quarter to put the Tigers back in front 12-7 as the two-point conversion pass fell incomplete.

It took the Vikings just eight plays to get the lead back as Michael Rabas crossed the goal line from two yards out with just over four minutes to go in the third quarter to make it 14-12 Denmark.

Chilton would come up with three take aways in the fourth quarter.

A Kaiden Mikalowsky interception set up the go ahead score.

Starting at the Denmark 28, it took just seven plays before Gavin Lisowe scored on a two-yard run, but again, the two-point conversion try failed and it was 18-14 with 9:02 left.

The Tigers forced a Viking punt, but they fumbled on the return and Denmark was set up with the ball at the Chilton 26.

Denmark would return the favor.

On the fifth play of their drive, Chilton's Connor Rowland jumped on a Viking fumble and CHS took over at their own nine yard line with four minutes left.

After a short drive stalled, Chilton punted the ball back to Denmark with under a minute left and Broeckel came up with his heroics.

The win snapped a six-game playoff losing streak for Chilton and was the first for coach Mike Arendt. The last Tiger playoff win came in 2006 when Chilton beat Kiel 35-0 before losing at Level 2, 21-20 in double overtime to Ripon.

Chilton takes a 7-3 record into next Friday's Level 2 game at top seeded Little Chute. The Mustangs whipped #8 Ripon 37-7. The Tigers and Mustangs kick off at 7 pm at Little Chute High School.